You all know Eliot Hochberg as the video producer and resident whipping-boy for Jimmy Pardo on Never Not Funny. But he is a very talented man apart from his work on Never Not Funny, and does much more than simply “run the cameras.” Also, his history with Never Not Funny and our late friend Andrew […]

Show notes by Darryl Asher. This episode was released in season 3, then re-released in season 14. Eliot Hochberg took Andrew Koenig’s Season 3 video archives and edited every episode into a full-length video. This was a remarkable undertaking, since the original video was never meant to be full episodes, but rather short clips of […]

Jimmy and Matt have graciously made available a special episode of Never Not Funny to pay tribute to our friend Andrew Koenig. It should be no surprise to anyone that they handle it with the honesty and class that we have come to expect. This recording is extremely moving, and was obviously difficult for them to […]

The world lost some warmth today 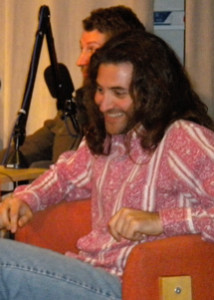 I’ve shared this in other places, but I thought I should add it here: I only met Andrew once. I consider it a great privilege, and a memory I will always carry. It was at the first Pardcast-a-thon and he was so nice to everyone and did his best to make everyone welcome, even with […]